Zenyatta’s transition from superstar racehorse to broodmare is going smoothly, according to William S. Farish, the owner of Central Kentucky’s Lane’s End Farm, which is the champion’s new home.

“She’s so smart that she just adapts very quickly,” he said in an interview Dec. 9. “She’s a real professional about everything.”

Owned by Jerry and Ann Moss, Zenyatta arrived at Lane’s End in a van the night of Dec. 6 following a flight from Southern California and an appearance at Keeneland, which attracted more than 1,000 fans. She was taken to a 24-stall barn where maiden and barren mares are stabled.

“When we walked her down the aisle, all the other mares started nickering; it was almost as if they knew who she was,” Farish said. “We put her in her stall and put a big blanket on her, and she settled in. She had a very good night.”

Because of snow and ice on the ground and unseasonably cold conditions, Zenyatta has spent most of her time at Lane’s End so far in her stall. But the 6-year-old daughter of Street Cry was hand-walked in her barn Dec. 7 and 8, Farish reported, and she was hand-walked outside in a paddock for the first time Dec. 9, when the daytime temperature rose above freezing.

“Not in particular,” said Farish when asked if Zenyatta had a reaction, either positive or negative, when her hooves touched the snow. “She thought everything was great. We’re not going to turn her out (let her do more than be hand-walked) until we get the snow and ice out of the way and we feel like it’s perfectly safe for her. But she’s so smart I don’t think there will be any problem.”

When Zenyatta is turned loose in a paddock for the first time, according to Farish, there will be three or four people with her to make sure she doesn’t get injured. If she’s calm, the strapping dark bay or brown mare could remain outside for two or three hours on that particular day.

“The paddock she’ll be in is 3 ½ to four acres and (its fence) is rounded so there aren’t any corners,” Farish said. “If she does get to galloping around pretty good, there won’t be a situation where she’ll be running into a corner. If she gets too excited, the people will catch her and ease her back into her stall. But that seldom happens with a mare; we’ll just be taking every precaution.”

Zenyatta probably will be turned out with another maiden or barren mare to begin with, and then, eventually, two or three others mares will join them in the paddock. Once Zenyatta’s routine has been established, she’ll spend five or six hours outside during the day, weather permitting, according to Farish, and then return to her barn at night.

“And that’s the way it will be until breeding season,” Farish said. “She’ll always be very close to her barn so that in a storm or something like that we can catch her very quickly and bring her in. She won’t be outside with a big group of mares. We want to be able to keep an eye on her and make it is easy for people to see her.”

Fans will be allowed to visit Lane’s End and view Zenyatta, but a plan hasn’t been finalized and probably won’t be “for a few months,” Farish said, so the mare can quietly ease into her new environment and schedule.

For most female racehorses, making the adjustment to farm life isn’t a difficult process and Farish predicted Zenyatta would adapt to a different routine with little drama.

“Some (maiden) mares don’t come in until after the breeding season has started,” he said. “After they get to the farm, they’ll be bred within a week or two without anything special happening. Zenyatta has a perfect amount of time. She’ll have plenty of time to acclimate to the farm and to adjust to her new life.”

“Oh Lord, it’s been amazing,” Farish said. “There have been so many calls that I don’t know the number and they’ve been nonstop since it was announced (that Zenyatta would be boarded at Lane’s End). People mainly want to come to see her and they’re from all over the country. I’ve never seen anything quite like it. She’s like a rock star.”

The Mosses have not announced to whom Zenyatta will be bred. 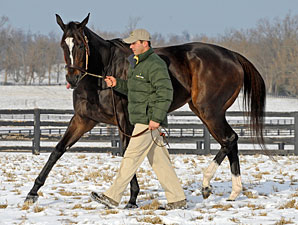