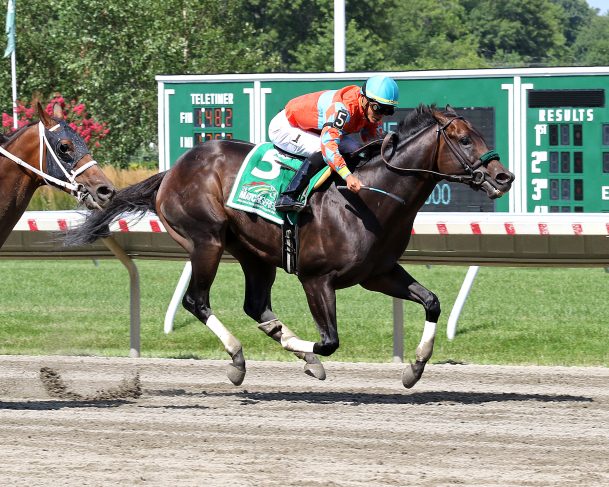 Name Changer, out of the four-time stakes-winning Northern Afleet mare Cash’s Girl, won eight races and placed an additional 10 times in 24 lifetime starts, for earnings of $567,080. A romping debut winner at age two going 6 furlongs versus maiden special weight company at Parx, Name Changer went on to win the Monmouth Cup St. [G3], Aqueduct’s Queens County Handicap and the Richard W. Small Stakes at Laurel, all going nine furlongs on the dirt. He also ran second in the Harrison E. Johnson Memorial St. at Laurel, third in the West Virginia Derby [G3], and in total, won or placed in black-type company at seven different racetracks, from ages two to seven, all on the main track.

A homebred runner for the Colts Neck Stables, LLC of Richard Santulli, Name Changer hails from the immediate family of Champion 3-year-old male and sire Afleet Alex, as well as major stakes winners including Seabhac, Unforgettable Max, and Topic.

He will stand for a fee of $2,500 live foal, stands and nurses, as property of Kaz Hill Farm, and a limited number of lifetime breeding rights are available, as well.

“Anyone paying attention to the leading sire lists knows something big is happening when it comes to Uncle Mo,” said Kazamias. “Not only does Uncle Mo himself have 14 graded stakes winners in 2020, more than any other stallion in the United States, but his sons Nyquist, Laoban and Outwork rank first, second and fourth on the North American leading first-crop sire list. With a powerful build reminiscent of his sire, and his undeniable racing class, it’s easy to imagine Name Changer carrying on that tradition.”

Alan Goldberg, who trained Name Changer for his first four seasons before turning over duties to Jorge Duarte, Jr., said the horse stood out for his class, willingness and durability. “He always showed up — the way the best offspring of Uncle Mo do,” added Goldberg. “Colts Neck Stables retained some breeding rights, and we’re planning to send our New York-based mares to him.”

Bloodstock agent Michael Slezak, who brokered the deal to buy Name Changer and serves as Kaz Hill’s manager of bloodstock, said the parallels between Uncle Mo and Name Changer make him a tremendous prospect. “Uncle Mo’s maiden win going 6 furlongs at Saratoga as a 2-year-old, that has to rank as one of the greatest debuts in the history of the sport. Similarly, Name Changer showed the ability to win first time out as a 2-year-old at the same 6 furlong distance — which really caught our attention. At the same time, Name Changer was still hitting the board in stakes company in November of his 7-year-old season – and that’s a big selling point for smaller operations who rely on New York State breeders’ awards and are trying to get runners who stay sound and competitive over multiple racing seasons.”

Slezak added he will be shopping the upcoming Keeneland January Sale and Fasig-Tipton February Sale to find additional mares for the horse’s initial book. “Kaz Hill already has a very deep broodmare band, but we want to make sure Name Changer gets the best possible start at stud.”

To that end, Kazamias said Kaz Hill has priced seasons and breeding rights to make sure breeders in New York and the entire Midatlantic region don’t get left out of the action. “We know that 2020 has been very hard on everyone in the horse business — especially regional breeders,” Kazamias said. “What we’re hoping to do with Name Changer is give everybody — from the biggest commercial operations to the folks who only have one or two mares — a chance to hit it big without spending a fortune. Four years ago, Laoban started out in New York and now he’s in Kentucky for a $25,000 fee. Big things can happen when you tap into the power of Uncle Mo.”