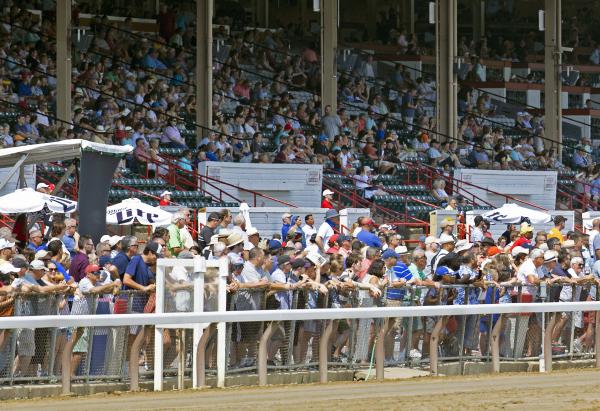 A year after fans were not allowed to attend the Saratoga meet due to the COVID-19 pandemic, 27,760 fans poured through the turnstiles Thursday to usher in the start of the 153rd Saratoga season.

Fans who showed proof of COVID vaccination were able to get free grandstand admission for Thursday’s opening-day card.

There was a delay in posting the handle figures as a tote error was discovered with the pick six. According to the New York Racing Association, there were some pick six bets made through the TVG hub at the 20-cent denomination, which had been the minimum price the last time there was racing at Saratoga in 2020. The wager had been changed to a $1 minimum beginning with the Belmont spring/summer meet in April. It resulted in a total of $41,793 being refunded to TVG players, though that money was seeded back into the pool to make the pool of $275,690 whole. There were two winning tickets sold on the pick six, worth $87,742 each.

Besides that, the only other noticeable snafu on the day was the lack of a live race-call on race 4.

Irad Ortiz Jr., Saratoga’s leading rider three times in the last six years including 2020, won two races on Friday’s card including the Grade 3, $150,000 Quick Call Stakes on Golden Pal. Ortiz also won the first race of the meet on Charlie’sarchangel, who held off longshot Ekhtibaar by a neck.

Ortiz said there are “no words” to describe what it meant to have fans back in the facility.

“I thought last year was very sad,” Ortiz said. “I really missed the fans. I feel very excited and very happy to have them back.”

Robertino Diodoro trained the winner of the first race of the meet for the second time in four years. He called last year’s meet depressing, not only because there were not fans, but also because he went 1 for 20.

“We didn’t have a very good meet, and that didn’t help either, but it was pretty depressing to be honest from all aspects,” Diodoro said.

Luis Saez was the leading rider on the day with three victories, including a front-running score aboard Pretty Birdie in the Grade 3, $150,000 Schuylerville for 2-year-old fillies.

The pick six snafu aside, NYRA president and CEO Dave O’Rourke, said: “Saratoga is back, and there’s no place better to be.”