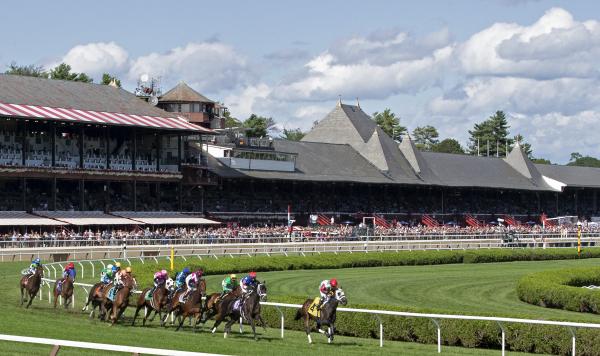 Though 174 races were run on the turf during the Saratoga meet, 45 were taken off during an unusually wet summer.

SARATOGA SPRINGS, N.Y. — The unexpected shower that fell here shortly before 1 p.m. Monday afternoon was emblematic of the summer it’s been in Saratoga, one in which 45 races scheduled for turf were rained off to the dirt.

The blue skies and sunshine that moved the rain out 20 minutes later also was befitting the type of summer it’s been here with sensational racing resulting in box-office business and bringing Saratoga out of the COVID cloud that forced fans to be prohibited from attending the 2020 meet.

While O’Rourke was happy to have the fans back — not only for the track but for the town of Saratoga Springs —  he credited the NYRA/Fox Sports daily television shows with driving handle to new heights.

“That specific number I think has a lot to with the traction of television,” O’Rourke said of the $800 million handle figure. “Last year, with all the challenges, the one thing from a business perspective is we were able to broaden the audience a little bit and a lot of it stuck around. It stuck around because we’re displaying the content in a way that’s easily consumable.”

Still, O’Rourke acknowledged that a day in Saratoga can be as economically affordable as one wishes. He notes that a family of four with young kids can get into the track for as little as $14 and bring their own food and drink.

“No one else can compete with that and that’s a business decision that was made here a long time ago,” O’Rourke said. “It helps to create the atmosphere of what makes Saratoga kind of have its vibe during the day. Hang out in the backyard, families can have a day out at a sporting event where it doesn’t cost them a couple of hundred dollars.”

Though there was an uptick in the COVID positivity rates in the Capital Region, it didn’t seem to have much of an impact on attendance. Average daily attendance was 26,162.

“Everyone wanted to be here, everyone’s having fun, we got through it,” O’Rourke said.

O’Rourke said 12 NYRA staff members and 10 people on the backside tested positive for COVID during the meet. Contact tracing was done where close contacts to those who tested positive were forced to quarantine briefly and get tested.

“To my knowledge, no one got seriously ill,” O’Rourke said.

Saez had 10 three-win days and captured the meet’s marquee event, the Grade 1, $1.25 million Travers aboard Essential Quality, as well as five other graded stakes.

“It means everything,” Saez, 29, said of his first Saratoga crown. “You guys can see how tough it is to win a race here, to win [64] races here is more than wonderful. I’m so happy for the horses, the trainers they give me the opportunity and my agent Kiaran [McLaughlin] did a very good job.”

This was a breakout meet for Santana, who in addition to winning 35 races, led all riders with five Grade 1 stakes, capped by his victory aboard Gunite in Monday’s closing-day Hopeful.

“To win five Grade 1s at one meet is unreal,” Santana said.

“Probably the most rewarding of the meets we won just because we had a lot of things to overcome,” Brown said. “We had a terrible, terrible virus run through our barn since we arrived from Florida and it really took a lot of horses out of commission. We had a lot of seconds, a lot of rain. By mid-meet it didn’t look like we were going to get anywhere near 40 wins.”

Todd Pletcher, a 14-time leading trainer here, was second in the standings with 31 wins.

Mike Maker was third with 25 wins, and Steve Asmussen was fourth with 19 wins but he tied a Saratoga record for Grade 1 victories at a meet with five, something Pletcher did in 2010. Asmussen also won his record 9,446th race on Aug. 7 with the maiden winner Stellar Tap.

One of Brown’s primary clients, Seth Klarman, who races under the banner Klaravich Stable, was the leading owner with 21 wins, just missing the Saratoga meet record of 22 set by Ken and Sarah Ramsey in 2013.

In addition to Essential Quality’s victory in the Travers, there were some fabulous equine performances on that day’s undercard, including Jackie’s Warrior edging Life Is Good in the H. Allen Jerkens for his fourth graded stakes here in two years. Yaupon, a stablemate of Jackie’s Warrior, survived being savaged by Firenze Fire in the Grade 1 Forego. Letruska asserted her dominance in the older filly and mare division winning the Grade 1 Personal Ensign, while Gufo threw his name in the ring for the Breeders’ Cup Turf when he captured the Grade 1 Sword Dancer.

For the second straight year, there will be a 10-day break between meets with the 28-day Belmont Park fall meet scheduled to begin Sept. 16.

As for next year, you’re pretty safe to circle July 14 as opening day of the 2022 Saratoga meet.