New York-breds wrapped up a stellar juvenile sales season with a strong performance at this week’s Ocala Breeders’ Sales Company’s 2022 June Sale of Two-Year-Olds and Horses of Racing Age, which ran for three sessions from Tuesday, June 7 through Thursday, June 9.

The New York-bred topper was a More Than Ready colt bred by Kingsport Farms, LLC who brought a quarter-million dollars. Noteworthy as well was the top New York-bred filly of the group, a member of the first crop of New York sire Redesdale (Speightstown). A breakout success, she brought $150,000 to become the first six-figure juvenile for her sire. Overall the indicators were positive for the program, as the median New York-bred sale price was strong enough to match the OBS June median of $25,000, which was a sale record. The New York RNA percentage came in two ticks better than the RNAs for the sale as a whole.

The bidder who went to $250,000 to purchase the More than Ready colt was Lane’s End Racing. Offered as Hip 695 by the consignment of Kings Equine, Agent for Spendthrift Farm LLC, the dark bay or brown youngster turned in an eye-catching work in the fourth session of the under-tack show on Thursday, June 2 as one of 12 horses to clock the fastest eighth in :10 flat. (Breeze Video)

Foaled on January 25, 2020 at Fort Christopher’s Thoroughbreds, the New York-bred topper was also well-received at his auction debut as a short yearling, when he sold to Rosemont Farm 2020 LLC for $175,000 at the 2021 Keeneland January sale.

The More Than Ready colt is the second of four foals out of Brandy, by Unbridled’s Song. A winning daughter of stakes winner Alienated, Brandy is a half-sister to Rally Cry, a stakes winner who earned over $500,000 and finished second to Gun Runner in the 2017 Grade 1 Woodward Stakes. Breeder Kingsport Farm purchased Brandy (who has since been resold) for $470,000 at the 2018 Keeneland January Sale. 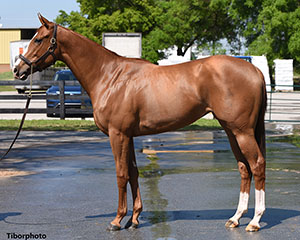 The breakout Redesdale filly, consigned by Omar Ramirez Bloodstock, Agent and offered as Hip 123 in the sale’s opening session, was purchased by Clay Scherer, Agent. She breezed a swift quarter mile in :21 1/5 in the first session of the under-tack show. (Breeze Video)

A relative veteran of the sales ring, the filly sold for $30,000 as a yearling at the Fasig-Tipton Midlantic fall yearling sale and RNA’d for $70,000 earlier this year at the OBS Spring juvenile sale before going to Scherer this week in Ocala for $150,000.

Bred by Windylea Farm – New York, LLC, the youngster was foaled on March 21, 2020, at Old Saratoga Equine Services. Out of Miz Midtown, an unraced daughter of Exchange Rate, her second dam is stakes winner Midtown Miss, who has produced three stakes performers. Miz Midtown’s only foal to race thus far, Bali’s Shade, is a juvenile winner. She has a yearling filly by Noble Mission (GB) and a 2022 colt by New York sire Honest Mischief. (Walking Video)

Redesdale, a son of Speightstown out of Harpia, a full sister to Danehill by Danzig, covered 81 mares in his first season at stud and stands at McMahon of Saratoga Thoroughbreds for a 2022 stud fee of $2,500. At the 2021 Fasig-Tipton Saratoga New York-bred yearling sale, a colt by Redesdale out of the winning Lemon Drop Kid mare Dakota Kid brought the highest price for a yearling by a New York-based stallion on a final bid of $140,000 from Dean and Patti Reeves’ Reeves Thoroughbred Racing.

Over the three sessions of OBS June 2022, 77 of the 92 New York-breds offered successfully changed hands for total sales of $2,957,700. The resulting RNA percentage of 16.3% slightly outperformed the overall buyback percentage for the sale of 18.3%.

The $25,000 New York-bred median price matched the overall median for OBS June, which was a record for the auction. Although the New York-bred average price did not quite keep pace with the OBS overall average of $41,159, it ended up in the ballpark, coming in at $38,412.