Fasig-Tipton’s Saratoga Sale of Selected Yearlings, a showcase for the crème de la crème of the season’s yearling crop, regularly features a subset of top-notch New York-bred yearlings who strut their stuff successfully in the most elite company. The 101st renewal of the auction, which took place at Humphrey S. Finney Sales Pavilion across the street from Saratoga Race Course on Sunday and Monday, August 8-9, was no exception.

The New York-bred topper, Hip 196 from the inaugural crop of Omaha Beach out of Glory Gold, brought a cool half-million dollars from Roy and Gretchen Jackson’s Lael Stables. Bred in partnership by Final Furlong Racing Stable and Maspeth Stable, the bay was foaled on February 11, 2021 at Schuylerville Thoroughbred Farm in Fort Edward. An individual who showcased her quality early, the filly brought $220,000 as a weanling from Sewanne Investments at the Fasig-Tipton Kentucky Fall mixed sale. Her consignor in Saratoga was Eaton Sales. [Virtual inspection: https://vimeo.com/736165139]. 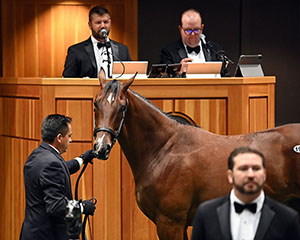 Hip 196, a daughter of Omaha Beach and half-sister to Espresso Shot and Venti Valentine, sold for $500,000 Tuesday at the Fasig-Tipton Saratoga sale of selected yearlings. Susie Raisher Photo.

The filly’s dam Glory Gold, a juvenile winner by Medaglia d’Oro and a native New Yorker bred by Dr. Lance Bell, has already produced two program stars. Espresso Shot, by Mission Impazible, a four-time stakes winner and earner of over $500,000, was purchased by Final Furlong Racing as a yearling at the Saratoga New York-bred preferred sale for $69,000. Hoping that lightning might strike twice, the partnership sought out and purchased Glory Gold in foal to Firing Line at the 2018 Keeneland November sale for $13,000. The resulting foal is current New York-bred star Venti Valentine, who took Final Furlong and partners to the 2022 Grade 1 Kentucky Oaks. A stakes winner and multiple graded stakes-placed, Venti Valentine was seen most recently on June 25 in the Grade 2 Mother Goose Stakes at Belmont and has amassed an earnings bankroll of nearly $450,000. With no 2022 foal, Glory Gold has been bred to Munnings. 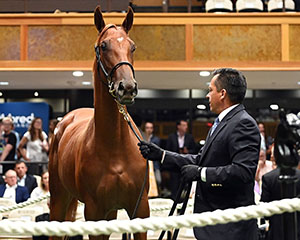 Consigned by Denali Stud, agent on behalf of breeder Lady Sheila Stable, LLC along with Maverick Racing and Siena Farm, the sale filly was foaled on February 9, 2021 at Vivien Malloy’s Edition Farm in Hyde Park. She is the second foal for her dam, who produced a filly by Uncle Mo in 2022 and has been bred to Gun Runner. [Virtual inspection: https://vimeo.com/734733821]

Completing the trio of second-generation standout New York-bred fillies was Hip 93, a bay by Omaha Beach who issues from one of the most familiar and accomplished families of Chester and Mary Broman’s premier breeding program. 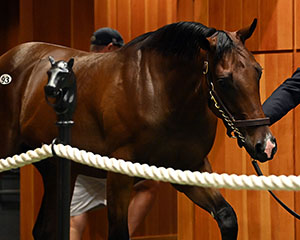 Hip 93, a half sister to multiple graded stakes winner Highway Star, sold for $350,000 during the first session of the Fasig-Tipton Saratoga Sale. Susie Raisher Photo.

Peter Brant’s White Birch Farm, Inc. went to $350,000 to acquire the filly, who was consigned on behalf of the Bromans by Sequel New York. She was foaled at the couple’s Chestertown Farm in Chestertown on April 4, 2021. [Virtual Inspection: https://vimeo.com/736965570] 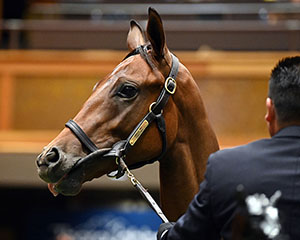 Selling in Tuesday’s second session from the Sequel consignment, the Laoban colt was conceived during his sire’s final season in New York, before he relocated to Kentucky on the heels of his early success before, sadly, passing away prematurely. Foaled at Sequel Stallions in Hudson on February 23, 2021, the colt is out of the winning Kentucky-bred mare Aristra, who last changed hands at public auction when purchased by Fergus Galvin at the 2018 Keeneland November sale. Aristra has produced five winners from five foals to start, led by graded stakes performer Attachment Rate, by Hard Spun. Appearing under the colt’s second dam are stakes winner Vespers, dam of Grade 1 winner Hymn Book, and stakes winner Database, dam of Grade 1 winner and sire Data Link. [Virtual Inspection https://vimeo.com/736965083]

The Uncle Mo colt, who went through the ring on the first day of trading, was consigned by Mulholland Springs, Agent. Foaled on January 31, 2021 at Hidden Lake Farm LLC in Stillwater, the bay is out of Florida-bred Toasting. A multiple graded stakes performer by Congrats and earner of over $500,000 over four seasons, Toasting was campaigned by West Point Thoroughbreds and trained by Tom Albertrani. Without issue in 2022, she has been bred to Quality Road. The mare’s second foal is a winner. [Inspection Video: https://vimeo.com/734388810]

With the Saratoga Select sale now in the rear-view mirror, the Humphrey S Finney Sales Pavilion will next host the most eagerly anticipated annual auction for most New York breeders: the Fasig-Tipton preferred New York-bred yearling sale. The auction will take place on Sunday and Monday, August 14 and 15. Sunday’s session begins at 7:00 PM. Trading will kick off on Monday at 12:00 PM.