In 2018, the Fasig-Tipton New York-Bred Yearlings Sale had its best year ever, setting exciting new benchmarks for total sales, average, median and top seller. The following year, the New York-bred yearling marketplace experienced a natural correction and, from 2020 forward, the Covid pandemic has disrupted the economics and practicalities of the Thoroughbred Industry and beyond.

Against this backdrop, it seems astonishing that this year’s New York-bred yearling cohort—conceived and foaled under peak pandemic conditions of 2020 and 2021—would be the crop to return the annual auction to the giddy heights of 2018. In fact, the 2022 renewal of the sale met or surpassed the 2018 benchmarks, and established a new record for total sales of $20,175,000—the first time the auction cracked the $20 million mark.

Conducted over two sessions on the evening of Sunday, August 14 and the afternoon of Monday, August 15 at the Humphrey S. Finney Sales Pavilion on the Fasig-Tipton sales grounds in Saratoga Springs, the annual auction saw 188 New York-bred yearlings change hands. The headliner was an Arrogate colt, a new all-time sale topper who brought $700,000. The average price per lot was $107,314, which topped six figures for only the second time and ended up only about $200 shy of the all-time record attained in 2018.The median price came in at $74,000, again second only to the $76,000 median in 2018.

In all, more than a third of the New York-bred yearlings (68) brought six figures over the two sessions, including yearlings by New York sires Bankit and Mission Impazible. Twenty-six individuals topped $200,000, and 12 sold for $300,000 or more.

*In 2020, due to Covid travel restrictions, Fasig-Tipton consolidated the Saratoga Select and New York-Bred Yearling sales into one selected yearling auction held in Kentucky, calling it the ‘Select Yearling Showcase.” One segment was dedicated to New York-breds, but format and scale are not comparable to the annual sale and results are therefore omitted.

The new all-time sale topper, Hip 573, is a dark bay or brown colt by Arrogate bred by Kathleen Burke Schweizer and Daniel J. Burke purchased in the sale’s second session by Tom McCrocklin, Agent for Champion Equine, for $700,000. The previous high-water mark came in 2018 with a $600,000 Pioneerof the Nile colt bred by Jonathan Thorne.

Foaled on April 17, 2021 at Longford Farm in Elmira and consigned by Eaton Sales on the farm’s behalf, the topper is out of Georgie’s Angel, by Bellamy Road. A precocious Kentucky-bred runner who captured the Grade 3 Schuylerville Stakes in 2011 at Saratoga, Georgie’s Angel was purchased by Longford Farm with the sale colt in utero for $75,000 at the 2020 Keeneland November Sale.

A half-sister to another stakes winner, Georgie’s Angel has produced four winners from five foals to start, two of them juveniles. In a timely update, just before the New York-bred sale began, Cave Rock, a full-brother to the topper, impressively won a Del Mar maiden special weight at first asking. The colt’s third dam, Celmis, is a stakes winner and multiple stakes producer. Georgie’s Angel was bred to Connect in 2022. [Virtual Inspection: https://vimeo.com/739458998/b8ce426332]

The headliner of the auction’s first session was another colt, who tied the previous high-water mark for the New York-bred auction with a $600,000 price tag. Bred by Apache Farm and Godolphin and out of Passe, an unraced daughter of Dixie Union, Hip 378 was foaled on February 8, 2021 at Apache Stables (North) in Mount Morris.

A chestnut, the colt is a half-brother to New York-bred multiple stakes winner Wonder Gal, by Tiz Wonderful, an earner of over $900,000 with several graded placings, including a runner-up finish in the Grade 1 Mother Goose. Wonder Gal’s Into Mischief juvenile filly Wonder Wheel is undefeated in two starts, including the listed Debutante Stakes at Churchill Downs. The colt’s second dam is stakes winner, graded performer and stakes producer Gal on the Go, who is also the second dam of Grade 1 winner and millionaire Force the Pass. Consigned by Passe Perrone Sales Ltd, Agent, Joe Hardoon, Agent, signed the ticket for the colt. Passe was bred in 2022 to Tacitus.

The top filly of the sale was Hip 341, a bay daughter of Good Magic who went to Reeves Thoroughbred Racing for $370,000 from the consignment of Vinery Sales, Agent IV. The bay is out of Majestic Heat, a California-bred Grade 2 winner and full to multiple stakes winner Mensa Heat. Each sister earned over $500,000 on the racetrack. The filly was bred by Rockridge Stud in Hudson, where she was foaled on April 30, 2021. Her full sister to the Good Magic filly, Magic Glass, won her debut in a maiden special weight at Canterbury Park on July 30. Rockridge Stud purchased Majestic Heat in foal for $130,000 at the 2020 Keeneland November sale. She has been bred to Omaha Beach. [Virtual Inspection: https://vimeo.com/738492607] 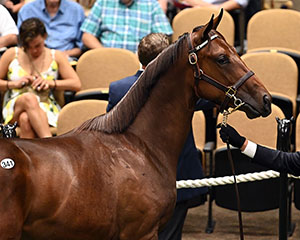 Already topping the New York and Northeast sire rankings again this year, Central Banker’s progeny came into the New York-bred auction on something of a roll. At the racetrack on Friday, Central Banker, who stands at McMahon of Saratoga Thoroughbreds, celebrated a stakes double when Bank on Anna annexed the Union Avenue Handicap and his top-earner and millionaire Bankit won the Evan Shipman Handicap. That evening on the sales grounds, at the New York Thoroughbred Breeders Inc.’s Annual Awards Ceremony, Bankit was named Champion Older Dirt Male and Central Banker’s best female runner, Bank Sting, took home the hardware for Champion Older Dirt Female and Champion Female Sprinter.

In the sale’s opening session, a dark bay or brown filly by Central Banker, offered by breeder McMahon of Saratoga Thoroughbreds as Hip 333, went to Saratoga Race for $140,000. Foaled on February 14, 2021 at her breeder’s farm and out of winner Liza Lu by Menifee, she is a half-sister to seven winners, topped by stakes winner Jemography by Big Brown, and two more stakes performers. The filly’s second dam is graded winner Chamrousse. McMahon and Hill Bloodstock acquired Liza Lu for $26,000 at the 2017 Fasig-Tipton fall mixed sale. 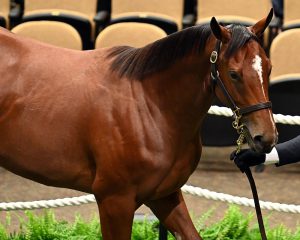 Hip 333, a daughter of leading New York sire Central Banker, brought the highest price for offspring of an Empire State stallion on a bid of $140,000. Susie Raisher Photo.

Mission Impazible, a top-three New York sire in 2022 standing at Sequel Stallions New York in Hudson, joined the six-figure club when the Elkstone Group went to $100,000 to take home Hip 395, a grey or roan colt with tantalizing family ties. Bred in partnership by Sequel Thoroughbreds and Lakland Farm, the grey is out of Right Prevails, an unraced mare out of Mrs. Greeley by Successful Appeal and full-sister to Grade 1 Kentucky Derby runner-up Closing Argument. Already the producer of two winners, Right Prevails is the dam of this year’s New York Derby winner Barese, by Laoban, and his stakes-placed full sister Breakfastatbonnie’s. Sequel’s Becky Thomas purchased Right Prevails at the 2016 Keeneland November sale for $52,000. In 2022, Right Prevails had a colt by Catalina Cruiser and has been bred to Justify. [Inspection video: https://vimeo.com/738118122]